In Malaysian Borneo, it is still relatively easy to find and photograph iconic proboscis monkeys in the wild… a highlight of one’s tour of Sabah and Sarawak.

Numerous national parks are home to these wondrous creatures, where they tend to live near the sea or rivers – which may be why they are also the primate world’s most prolific swimmers.

Bako National Park in Sarawak, just a stone’s throw from the capital, Kuching, is one such location, home to approximately 275 rare proboscis monkeys, just one of the numerous rare and extraordinary species to be found there.

A National Park since 1957, Bako offers the perfect introduction to Sarawak’s forests and wildlife. The park covers the northern tip of the Muara Tebas peninsula, an area of 27 sq km.  Despite its seemingly small size, Bako contains a wide range of vegetation – swamp forest, scrub-like padang vegetation, mangrove forest, dipterocarp forest, delicate cliff vegetation and more. In fact, at Bako it is possible to see almost every type of vegetation found in Borneo. 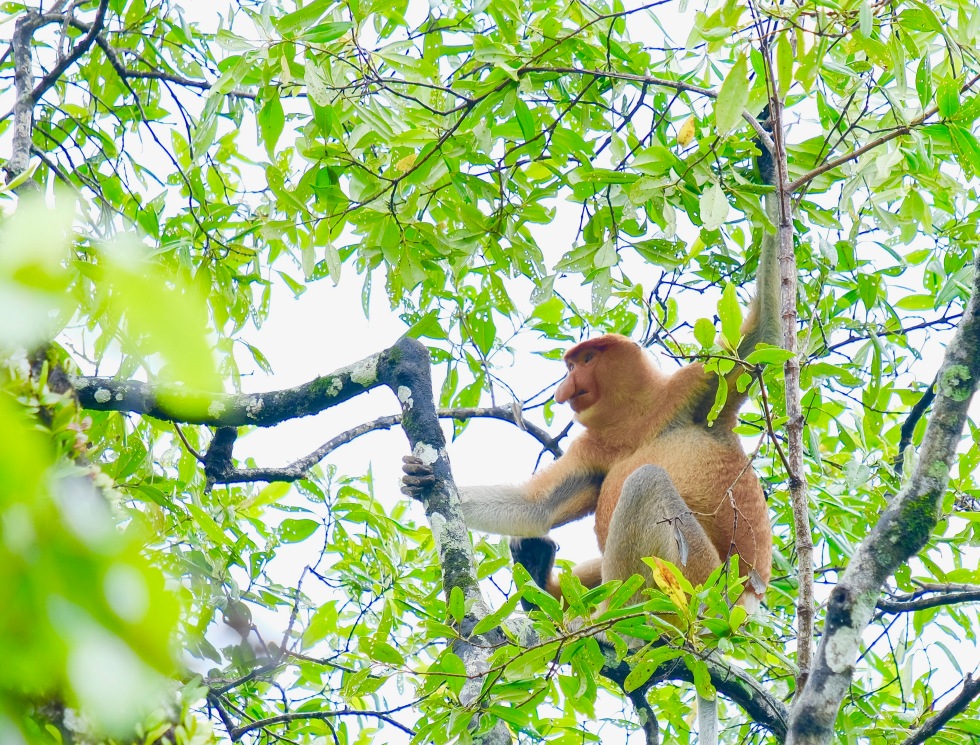 Bako’s extensive trail system is made up of 16 colour-coded jungle trails which offer a range of walking and hiking options. The fit and adventurous can opt for full-day jungle hikes or overnight camping expeditions, whilst those who prefer to take it easy can opt for a relaxing forest walk.

Bako also contains a rich variety of wildlife and a coastline covered with small bays, coves and beaches. The park has a number of well-marked trails offering interesting walks ranging from short pleasant strolls to serious full-day hikes. Unlike some national parks, visitors to Bako are almost guaranteed to see wildlife. Long-tailed macaque monkeys and silver leaf monkeys are ever present, wild boar are often found rummaging around the park HQ, squirrels and monitor lizards are also common. There is every chance of seeing the rare and unusual proboscis monkeys on trails such as Telok Paku and Telok Delima, particularly if you go late afternoon. You are more likely to see wildlife if you quietly follow the trails and keep listening.

The male proboscis monkey is an odd-looking creature, with a huge pendulous nose and a large pot-belly, weighing in excess of 20 kg. Both male and female are covered in reddish-brown fur with grey limbs and a white tail. They are mostly arboreal (tree-dwelling), moving about the forest or mangroves in small groups and feeding on young leaves, shoots, sour fruits and seeds. Although it requires some patience, an encounter with a group of proboscis is likely to be the highlight of your trip to Bako.

Another location where the proboscis monkey abounds is along the banks of the Kinabatangan river in eastern Sabah.

Numerous groups of monkeys gather on the Menanggul River in the evenings – an offshoot of Kinabatangan. Harems with huge dominant males and bachelor groups assemble in the treetops. Noisy displays, posturing and squabbles occur as the various groups settle down for the night. The first minute of the video below shows some of the typical behaviour you can see at these riverside gatherings.  It is a fantastic spectacle with hundreds of proboscis monkeys gathering along the length of the river.